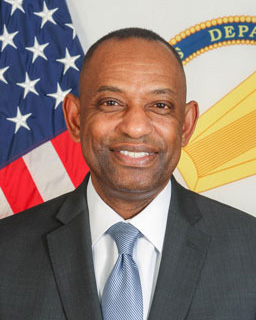 James C. Dalton serves as the Director of Civil Works, Headquarters, U.S. Army Corps of Engineers (USACE) in Washington, D.C. In this position, he leads, manages and directs the policy development, programming, planning, design, construction, operation, and maintenance activities of the Army Civil Works Program, a $6 billion annual program of water and related land resources of the United States, and oversees the work of over 25,000 civilian employees. He also represents the USACE in the United Nation’s Advisory Board High-Level Experts and Leaders Panel on Water and Disasters, and serves in several national and international water resources Committees.

Mr. Dalton was selected to the Senior Executive Service in January 2005. From May 2007 until August 2016 he was Chief of USACE’s Engineering and Construction (E&C) Division, responsible for policy, program, and technical expertise in the design and construction programs for the U.S. Army, Air Force, Department of Defense, other Federal agencies, and over 60 foreign nations. He also served as the Corps' South Atlantic Division and South Pacific Division Regional Integration Team (RIT) team leader, USACE Climate Change Adaption Committee Chair, and leader for USACE on Resilience.

Mr. Dalton served as the Regional Business Director for USACE’s South Atlantic Division in Atlanta, Georgia from July 2005 to May 2007. He was Director of Business Management for USACE’s Gulf Region Division in Baghdad, Iraq from 13 January to 31 July 2005, leading the Programs and Project Management organization. Mr. Dalton served as Deputy District Engineer for Programs and Project Management Division of USACE’s Alaska District, Anchorage, Alaska from 2001 until January 2005. There he was responsible for the execution of the district’s military, civil works, environmental interagency and international support programs and projects for the Army, Air Force, Department of Defense and other Federal, State and local agencies in Alaska.

From 1999 to 2001, he served as the Deputy District Engineer for Programs and Project Management Division and Chief, Ministry of National Defense/Host Nation Liaison of USACE’s Far East District in Seoul, Korea, where he provided leadership and oversight of a large military construction program. From 1997 to 1999, he was the chief and senior in-country representative for the Corps’ office in Egypt.

Mr. Dalton is a native of North Carolina and has been employed by the U.S. Army Corps of Engineers since 1978. After a short period of employment with the Environmental Protection Agency in Atlanta Georgia, he joined the Corps’ Wilmington District in Wilmington, North Carolina as a cost engineer after completion of the training program.

Mr. Dalton earned his bachelor’s degree in architectural engineering in 1978 from North Carolina Agricultural & Technical State University in Greensboro, N.C. He was selected for long term training and attended North Carolina State University where he earned his master’s degree in civil engineering in 1992. Mr. Dalton is a registered professional engineer in Virginia.

Mr. Dalton was awarded the Excellence in Construction Management Award in 1995, the nationally recognized Black Engineer of the Year Award in 2007 for Career Achievement, and the 2009 Greater Los Angeles African American Chamber of Commerce Public Service Award. Mr. Dalton also has received numerous performance awards including the Superior Civilian Service award in 2001 for his work in the Far East District and the Meritorious Civilian Service Award for work in Iraq in 2005. He received the U.S. Government’s Meritorious Presidential Rank Award in 2009 and the Distinguished Presidential Rank Award in 2014.